Nepal is a beautiful country, but like any country not everywhere is just so. Here are some suggested and rather varied places we think you’ll find interesting.  A mix of the “usual suspects” as well as “off the beaten path”….

…Of course if you go trekking in the Himalayas, then there are a great many fascinating and absolutely stunning mountain villages, with almost unique cultures in their own right….here we are focussing on places that can be reached without the need for days and days of challenging trekking…..places that “mere mortals” can enjoy 🙂

Stunning Newari architecture and incredibly atmospheric. Medieval Bhaktapur is a journey back in time. A ‘Must see”. If you have a romantic notion of Kathmandu as a spiritual, traditional, medieval and relaxed sort of place, just change that notion to Bhaktapur. This, the ‘City of Devotees’ is what you hoped Kathmandu would be like.

Bhaktapur is renowned for its pottery and for certain you’ll want to visit Potters’ Square and perhaps have a go yourself. Here you’ll see pottery being made as it essentially always has been.

Whilst other tourists visit Bhaktapur, (particularly coach parties) in the afternoon, surprisingly most don’t go beyond a ‘quick fix’ temples tour. Just step away from the temple stuff and down the narrow backstreets a whole new ‘secret’ side is ready for you to discover…hidden behind ‘that door’ is a family hard at work making beaten rice and rice flour…..or a local artisan making handicrafts.

Bhaktapur isn’t a big place and that wandering around is  an easy and straightforward affair…but to really soak up the Bhaktapur atmosphere it’s best to spend a night here…let the tourist buses go back to Kathmandu.

The beauty of staying in Bhaktapur is just being able to enjoy watching Bhaktapur being Bhaktapur. We know just the place to do this. From the rooftop of the Bhadgaon Guest House you can watch life go by, and as the guest house overlooks one of the main squares, there are stupendous views of the soaring pagoda temples too. Get up early and experience your own atmospheric moment as Bhaktapur wakes up and calmly and slowly goes about its day. If it’s clear you can usually see the peaks of the Ganesh Himal glow as the sun goes down.

If it’s all about ‘location,location,location’, then the tiny mountain village of Thasang has it. Outlandishly located beneath Dhaulagiri, its eagles nest position high above the Kali Gandaki Valley with views of the Nilgiris and Annapurna too must make this one of the most incredible places you’ve possibly never heard of. 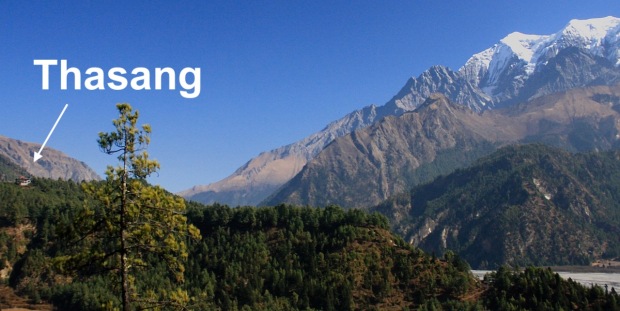 Thasang, the Kali Gandaki Valley and the Nilgiri Peaks

The tiny mountain village of Thasang (approx 1800m) could be a contender for most spectacular location with vehicle accessibility in Nepal.  We’ve by-passed it many times whilst trekking and biking the Annapurna Circuit.

Dhaulagiri and the dramatic ice fall

Quite possibly most other trekkers walking the Annapurna Circuit have missed Thasang too. This is principally because the village isn’t really on the trekking route itself, which is (at this stage) following the Kali Gandaki River Valley from Tukuche down to Tatopani. The village is perched high above the Kali Gandaki Valley floor, so it’s hardly surprising it gets by-passed as certainly until very recently there was nowhere to stay.

But now there is, the Thasang Comfort Lodge

So, why make the overland 6 hour journey by 4WD vehicle from Pokhara up to Thasang? As we said at the beginning, the location is truly spectacular.  Literally right above the village the imposing bulk of Dhaulagiri rises to 8167m, and you have completely uninterrupted views of this Himalayan giant, including it’s mind-blowing icefall.

Across the now broad Kali Gandaki Valley are the south peaks of the Nilgiris reaching over 6800m, as well as the 8091m Annapurna 1 summit that geographically forms the ‘other side’ of the Kali Gandaki Valley. So, basically what you have is an ‘eagles nest’ view of the deepest valley in the world!

And  you no longer need to be a hardy trekker to reach such a spectacular location.

We would also confidently say that the day walk  to the sacred lake of Sekong, beneath Dhaulagiri could be one of the best day walks anywhere in the world.

Why not the more famous Chitwan National Park? Because Chitwan is far too busy! Also we think wildlife opportunities are far superior in Bardia…many say your chances of seeing the elusive tiger is better in Bardia and we wouldn’t disagree.

Bardia in the far west of Nepal. Being further away from Kathmandu,  Bardia is nothing like as busy as Chitwan.

With the creation of the ‘next door’ Banke National Park, combined with Bardia this is now the largest tiger conservation area in Asia. Bardia is also home to the Asian elephant, the one-horned rhino, leopard, mugger crocodile and even the Gangetic dolphin. Over 300 species of birds also call Bardia home. 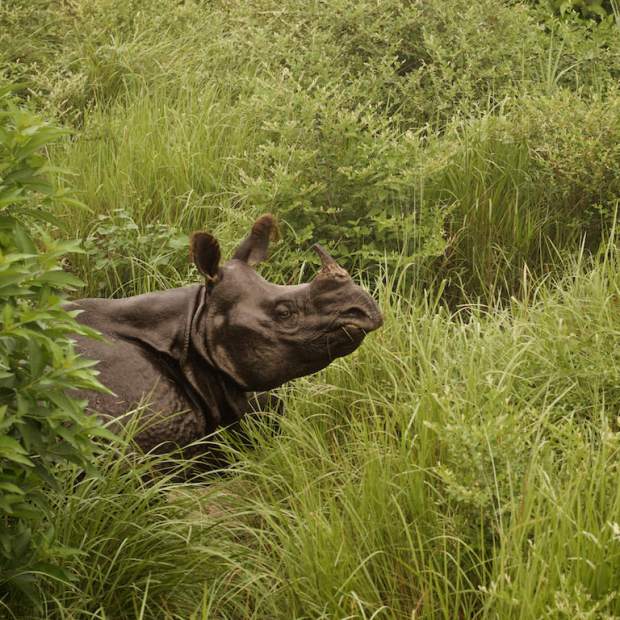 Even by private vehicle, Bardia is an arduous 12 hour drive from Kathmadu. It is better reached from Kathmandu by flying to Nepalgunj, a 45 minute flight and then around 2 hours by road.

dating back to the 14th Century, the fabled walled city of Lo Manthang, capital of Mustang, has enticed intrepid adventurers since tourists were first allowed to enter the forbidden Kingdom of Mustang in 1992. Trekking was the only way to Lo Manthang though. 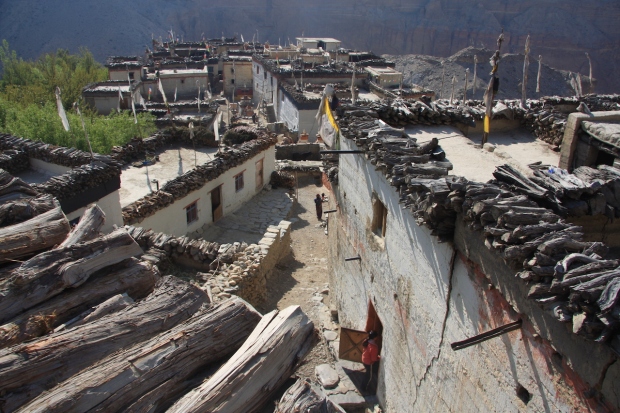 The impossible is now possible. A journey by 4WD vehicle into the forbidden kingdom of Mustang and all the way to Lo Manthang.

Now you can discover the land behind the Himalayas without many days of challenging trekking at relentless high altitude and travel across the high passes of the Tibetan plateau by jeep to discover this famously ‘off limits’ other worldly, wild landscape. 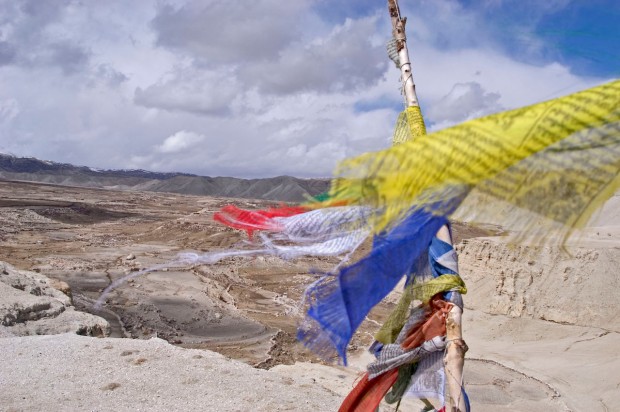 The village has a population of less than 900 and consists of around 180 homes. However, Lo Manthang is noted for its tall white washed mud brick walls and gompas, as well as the (now former) Royal Palace, a nine-cornered, five story structure built around 1400.

There are four major temples: Jampa Lhakhang or Jampa Gompa, the oldest, built in the early 15th century and also known as the “God house”; Thubchen Gompa, a huge, red assembly hall and gompa built in the late 15th century and located just southwest of Jampa Gompa; Chodey Gompa, now the main city gompa; and the Choprang Gompa, which is popularly known as the “New Gompa”.

Looking for the REAL, rural and unspoiled Nepal?

Look no further! The delightful hill village of Nuwakot is just perfect to ‘discover’ genuine Nepal village life as well as a place to ‘get away from it all’….relax, unwind and be at ease with life. 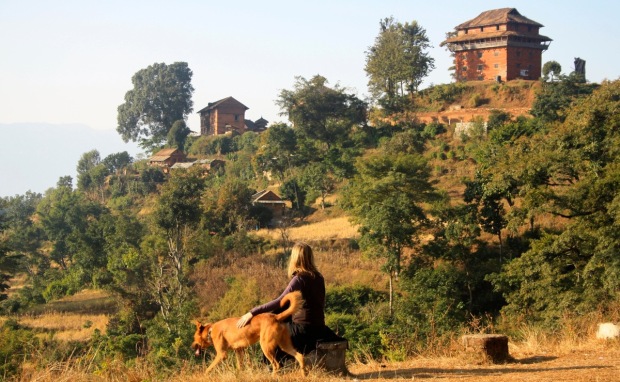 It’s a stunning journey of around 3 hours from Kathmandu mostly on the main road that ultimately heads up into the Langtang and then to Tibet . As you reach the top of a 2000m road pass the views of the Himalaya are staggering. Dropping down, down, down, just past the town of Trisuli Bazaar a single track (and recently metalled) road heads up, up, up through scented pine forests and ends at Nuwakot itself.

Even the goats are friendly in Nuwakot!

This small village is perched high above the Trisuli River Valley. The views down to the river are dramatic enough, but, there’s also the odd snow-capped peak popping out too. The problem is which direction to stare in. The village also has a southerly aspect, and being at an altitude of around 1400m to  it enjoys the sun all day, but most of the time is neither too hot, nor too cold. Just about right.

Carefully sculpted terraced fields, tiny (often mud brick) homes and farmsteads, friendly locals and a place where nothing is happening, but everything is going on at the same time.

Nuwakot is just one of those places that is best discovered at ‘pottering about’ pace. In other words, it’s best to move at the same speed as the locals…..slowly. Why rush in a place that you’d half expect to see a ‘no rushing’ sign?

In ‘down town’ Nuwakot there’s an old Royal Palace, as well as a fort.

A bit of brief huffing and puffing gets you to a fine hill top viewpoint with a “this was worth it” panorama. Definitely worth it for either sunset or sunrise.

We would respectfully suggest that if you really do want to feel part of the real Nepal, then you should at least consider spending 2-3 days at Nuwakot. Slow down, unwind, relax and read that book good and proper that you’ve not had chance to read yet.

Nuwakot really is a place that will fascinate the curious, and a place to just go…..”aaaah”.